Individual country pledges to reduce greenhouse gas emissions would need to be strengthened in order to limit future climate change to well below the 2°C limit included in the Paris climate agreement, states a new assessment in which the CD-LINKS consortium participated. Access the publication here.

Pledges made for the Paris agreement on climate change last winter would lead to global temperature rise of 2.6 to 3.1°C by the end of the century, according to a new analysis published in the journal Nature. In fact, the entire carbon budget for limiting warming to below 2°C might have been emitted by 2030, according to the study.

“The Paris Agreement was a historical achievement for the world’s response to climate change, aiming at limiting warming to below 1.5°C and 2°C. It puts in place a flexible framework for a long-term transformation towards a low-carbon society. But our analysis shows that these measures need to be strengthened in order to have a good chance of keeping warming to well below 2°C, let alone 1.5°C,” says Joeri Rogelj, a researcher at the International Institute for Applied Systems Analysis (IIASA) who led the study.

The 2°C target aimed to limit future climate change to an average temperature increase of below 2°C above preindustrial levels, as research suggested that this could help avoid some of the most dangerous impacts of climate change. The target was agreed upon by 190 countries at the Cancun climate meeting in 2010. In Paris last December, countries strengthened this target by requiring temperatures to be limited to “well below” 2°C and furthermore agreed that they should strive to limit temperature rise even further, to 1.5°C. Some studies suggest that even two degrees of warming would lead to unacceptable impacts, particularly in vulnerable countries such as island nations and least-developed countries.

The new study provides an in-depth analysis of the pledges which countries submitted at the Paris climate meeting in December, the Intended Nationally Determined Contributions (INDCs). In order to assess what would happen after the pledge period ends in 2030, the researchers assumed that emission reduction efforts would be continued at the same level of effort after 2030. Based on these projections, and using a variety of different models, they estimated that median global temperatures would reach 2.6 to 3.1°C by 2100. The researchers also examined what additional measures would be necessary after 2030 to limit future temperature rise to 2°C or 1.5°C in 2100.

Niklas Höhne, a researcher at the NewClimate Institute in Germany and Wageningen University who also worked on the study, says, “To go the rest of the way, we would need to assume much more stringent action after 2030, which leads to emissions reductions of about 3-4% per year globally. But in practice, switching to such stringent reductions right after 2030 would be challenging, and require time—that means that in order to ensure a chance of meeting these targets, we need significant further action from countries before 2030.”

The study also provides a careful analysis of the uncertainties surrounding future emissions and temperature targets. For one thing, the emissions reductions from the INDCs remain uncertain, since the INDC’s themselves are not consistently framed, and some of the pledges include conditional statements, for example, that a country will only implement ambitious emissions reductions if it receives funding from others. Comparing the possible emission levels that the INDC’s could imply, the researchers found a range of uncertainties of 6 billion tons of CO2 equivalent, or roughly the entire emissions of the United States in the year 2012.

The other major uncertainty lies in how much temperatures will rise in response to various emission levels. For this reason, temperature targets are often interpreted in terms of probabilities, with the aim to have a 66% likelihood of keeping temperature to below 2°C above pre-industrial levels. The study also found that the same INDCs would only avoid 2.9-3.4°C of warming with a 66% chance and 3.5-4.2°C of warming with 90% chance until 2100.

IIASA Energy Program Director Keywan Riahi says, “Our study clearly shows that the current national (INDC) plans are too incremental and thus inconsistent with the long-term ambition from the Paris agreement. If we want to keep 2°C within reach, we’ll need much more rapid and fundamental changes. The hope is that the post-Paris policy process can deliver this.” The CD-LINKS project will continue to analyze the gap between the current pledges and the 1.5°C and 2°C targets for a better understanding of the challenges and opportunities that lie ahead for closing the gap, both globally as well as on a country level.

Harald Winkler, a researcher at the Energy Research Centre in South Africa, also worked on the article. He says, “While some uncertainties, like the temperature response uncertainty, are virtually irreducible over the coming years, uncertainties about what the INDCs add up to in terms of emissions are not. Immediate future work should therefore focus on a better understanding of what the INDCs mean and how they link to other socio-economic objectives, including the UN Sustainable Development Goals.” The CD-LINKS project will contribute to analyzing the implications of different future emissions pathways on other, non-climate, sustainable development objectives, and vice versa. The project aims to give direction to policy makers on potential synergies and trade-offs of implementing climate and other development policies. 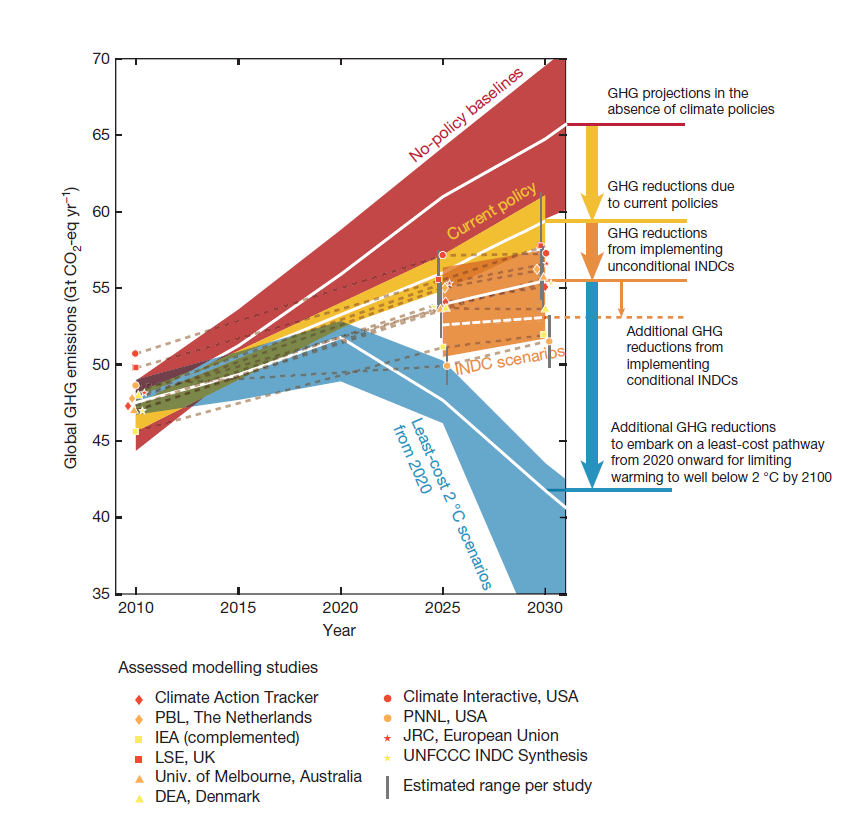