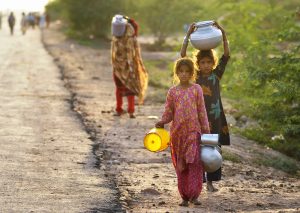 Even as average incomes rise in developing countries, access to sanitation and clean energy have yet to reach the poorest people, a new study shows. But there is room for optimism. Access the paper here.

As incomes rise in developing countries, access to basic amenities such as electricity, clean cooking energy, water, and sanitation, also improves—but not uniformly, and not as quickly as income growth, according to a new study published in the journal Environmental Research Letters. The study looked at historical rates of energy access compared to other living standards and GDP.

“What we found is that income growth alone isn’t enough on its own to get these basic necessities to all people in society,” explains IIASA researcher Narasimha D. Rao, who led the study.

The researchers also found that access to clean cooking energy and sanitation lagged behind access to electricity and water, a finding which has an outsize impact on the poorest members of society, and especially on women.

“Women bear the brunt of health risks that come from cooking with solid fuels, as well as from lack of sanitation, because women are predominantly responsible for cooking and household work,” explains IIASA researcher Shonali Pachauri, who also worked on the study.

The United Nations Sustainable Development Goals (SDGs) aim to achieve universal access to clean energy, water and sanitation by 2030. In order to achieve these goals, the study shows, sub-Saharan Africa in particular would have to see unprecedented rates of improvement compared to historical trends in the region.

The study showed that historically, countries have achieved 80% electrification rates quite quickly, but that getting to 100% can take much longer. Yet some countries, such as Vietnam and Thailand, have managed to improve access faster than earlier adopters like the US. For instance, most countries that embarked on electrification prior to 1970 took from 19 to 27 years to increase access from 20 to 80% of their population, and an additional 20 to 40 years to get to universal access. However, Vietnam and Thailand, which embarked on electrification after 1970, took 15 years to increase access coverage from 20 to 80%, and a further 11 to 20 years to reach full electrification.

“This means there is room for optimism,” says Pachauri.

The study highlights the challenge of achieving the SDGs, but also points to policy directions that could help. “In order to achieve the aims set by the SDGs, policymakers must look at the synergies and dependencies between these different goals, and find ways to combine efforts across sectors to build up infrastructure,” says Rao.